It was Mesmer who gave the world the word ‘Mesmerism’ - but unfortunately, although it is doubtless true that it was he who was the father of hypnosis and hypnotherapy, it was also he who contributed to the bad reputation that hypnosis suffers even to this day.

His own reputation has now been more or less redeemed but some of his ideas were so far ahead of their time that in keeping with many other visionaries, he was to a certain extent, ostracised by his peers. 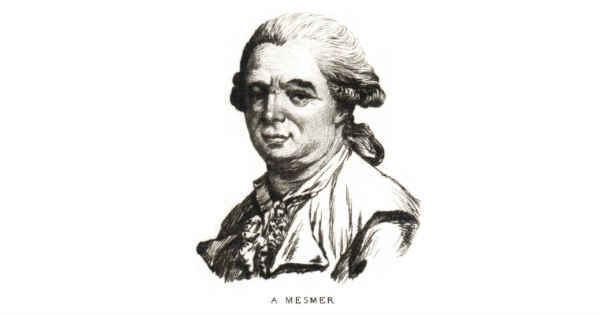 How Mesmer 'thought of' Hypnosis.

Franz Mesmer was born in 1734 in south-western Germany, although he is often referred to as a ‘Viennese’ physician.

His advanced thinking is best exemplified by his introduction of pain control via hypnosis - or rather what we might nowadays call hypnotism.

Chemical anaesthesia was not introduced until 1846. Consequently, prior to that date surgery was a terribly painful and harrowing experience - which meant that those on the receiving end would do practically anything to dull the pain – anything from being knocked unconscious to using alcohol or any other chemicals to dull the pain.

Otherwise, it was a case of having to endure the unimaginable agony of being operated upon in a fully conscious state. Until proper analgesic was introduced, pain control was very much a hit and miss affair.

France Mesmer introduced some rudimentary trance-related ideas about pain control in the early 1800s. Although there were some surgeons who used his techniques, as soon as reliable analgesics were introduced in the mid-1800s, his methods gradually disappeared and were not properly revived until the latter part of the 20th century.

We mentioned Mesmer in our part 1 of History of Hypnosis series - read it now.

Even though Mesmer is credited with being a pioneer of hypnosis, his ideas were not based on what we now understand to be the conscious and subconscious.

He was influenced by Newton’s Gravitational Theory and he believed in patients being adversely affected by gravitational tides.

One of his most celebrated cases involved curing a patient through the use of magnetism. It is now recognised that although both he and the patient believed that it was magnetism which was drawing the illness from her body, it is now generally accepted that the patient’s miraculous recovery was more likely produced by the ‘suggestion’ that the illness was somehow removed by magnetism, plus Mesmer’s combination of touches and hand gestures.

It was Mesmer who inadvertently went into show business by demonstrating his extraordinarily new technique all over Europe and being one of the earliest people to be seduced by the cult of celebrity.

Unfortunately this alienated him from the medical establishment who even then were very conservative and consequently he was denounced as a charlatan.

There is little doubt that he was using hypnosis without realising it and all the attached mystery, showmanship, exotic hand gestures etc will doubtless have contributed to his subjects going into trance.

It was he who coined the phrase ‘animal magnetism’ as he believed in the tidal influences of the planets on the human body through a mysterious universal force which could be affected by magnetism.

The magnetism aspect of his success was no more crucial to the process than a modern hypnotist swinging a pocket watch or pendulum in front of a patient’s eyes in order to assist with the hypnotism or Mesmerism process.

Needless to say, his claims were tested by the medical establishment. Unsurprisingly they were proved to be false because even he did not realise that it wasn’t the magnetic ‘Mesmeric pass’ which was creating a trance-like state - but his own interaction with the patient.

In later life, Mesmer re-established himself in Paris and the show business aspect of his work amplified as ‘Mesmeric salons’ were created all over the city with Mesmer’s manner and extravagant dress adding to the mystique.

Hypnosis was Recognised as a Real Fenomenon.

Although Mesmer did seek some sort of endorsement from the French Academy of Sciences as well as the French medical establishment – his demonstrations were greeted with a certain amount of derision. However the French Faculty of Medicine was eventually convinced because the more enlightened members realised that this was a real phenomenon that they were witnessing.

Mesmer continued his obssession with the theory of ‘animal magnetic ether’ with the quite reasonable theory that just like gravity or magnetism, this was an invisible ‘force’ which could only be observed through its effects. Obviously, this was very difficult to either prove or disprove.

Mesmer soon acquired followers (or disciples) and Mesmerism became what can only be described as a huge ‘craze’.

Eventually even the French establishment turned on Mesmer because they really could not confirm the ‘ causes’ of Mesmerism and eventually Mesmer moved to England and then other parts of Europe.

Luckily, Mesmerism continued as a craze because it was definitely producing results and Mesmer’s legacy was taken up by French neurologist Jean-Martin Charcot and eventually passed and formalised by another Viennese doctor named Sigmund Freud.

There is little doubt that because Mesmerism was not properly understood even by Mesmer, it was not he who was able to make the link between the mind’s amazing power over the body.

That was left to others and even now, the exact ‘mechanism’ of the hypnotic trance is not fully understood – although the medical establishment certainly does recognise Mesmer’s pioneering contribution to psychology.

Today, we know how hypnosis works, we can define hypnosis - and we can even help you try it out yourself. The free download is here.